How to measure pull force on a (kite) rope?

Furthermore, I also have a raspberry pi installed within the kite and I want to measure some pull on ropes in the air. So if possible, I also need very small/light scales from which I can read out the data. It would be great if the scales can measure up to about 50kg, but with some pulleys about 20kg would be fine as well.

Unfortunately I can't find any digital hanging scale with a possibility to read out the data and which is reasonably light. There are some simple USB powered hanging scales, but I think they just use USB for charging, not for reading out data. And I also found this one, but that's a bit overkill (too heavy and too expensive).

So question #1: Does anybody know where I can get a simple existing hanging scale from which I can read out data?

If needed I can also build something, but I just wouldn't know where to start. I did find this page on Alibaba, where they show the contents of the scale they offer: 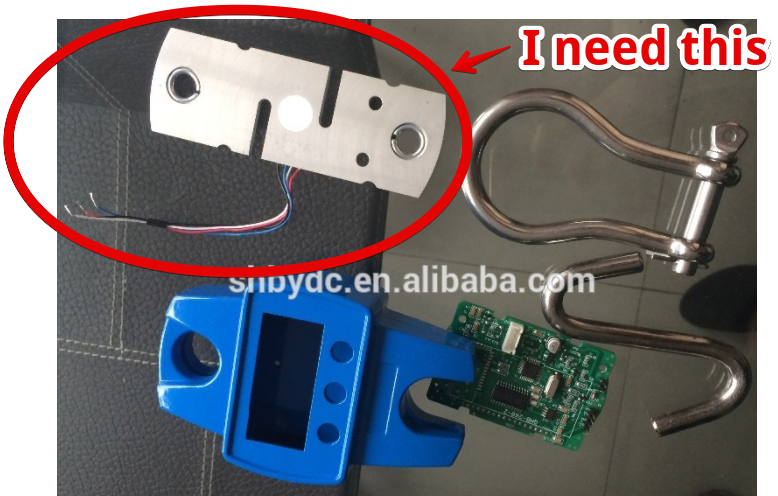 So as far as I understand I need the component which I highlighted. But I have no idea how that component is called (what do I search for?) and whether it is actually doable to read it out from a Raspberry Pi.

Question #2: does anybody know what the highlighted component is called, where I could possibly get it and if I can read it out from a Raspberry Pi?

In conclusion; can anybody point me in the right direction?

The component you highlighted is called a tensile load cell. You could buy one from a supplier, but it probably would be cheaper to buy a cheap digital hanging scale and taking the sensor out of it - at least I couldn't find one less than $100, ten times the price of a 50kg digital hanging scale.

You will need to do some analog conversion and amplification of the signal and then convert to digital with an ADC; I haven't done so myself but Sparkfun's load cell tutorial seems a good start.

The other means is to create your own scale, with a stiff spring and some sensor detecting its movement, such as a digital depth gauge - which costs $3 and has a serial output.

What about a flex sensor? Here's one for less than $10 at Sparkfun.

Wherever there is tension there must also be flexsion in a crossmember of the kite or in the membrane. A little bit of experimentation might get you the data you seek.