Inverse kinematics for a robot lamp

I've been working on a robot lamp. Looking something like this: 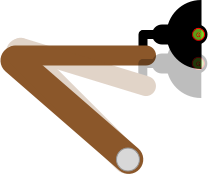 So i had a few questions. I've decided to simplify the movements by giving the head a fixed orientation like you see in the picture. The lamp can move around it's own center, but those movements are directly relatable to the X Y Z position of the end effector.

If I have understood all I've read correctly, I'll be able to calculate the other angles, which are now all in the same 2d plane, just by using some geometry right? I've worked out these formula's already (haven't tested anything yet).

If i do want the head to also move around the same plane, the calculations would get A LOT harder and more complicated and there would be a lot of possible solutions, is that right? Or is there an easy step to get to this point when i already did it with the fixed orientation? And even if it would be manageable, would it be a good addition? Because I want the lamp to look at you, and the generated angles could make it look in a weird direction.

Is writing an algorithm the way to go, or would i be better of just hardcoding movements? What would be your tips if you were to make something like this, regarding movement?

Thank for reading and i hope someone can tell me if i'm on the right track here, thanks.

Browse other questions tagged robotic-arm kinematics inverse-kinematics or ask your own question.