I've implemented a simple robot simulation based on the equations from EKF localization with known correspondence found in Probabilistic Robotics by Thrun et. al. Everything seems to be working but I noticed the covariance matrix has an odd behavior when doing prediction only.

I checked my implementation many times for errors but I now suspect this issue may be attributed to the fact that the Jacobians V and M uses signed values of velocity and angular velocity, instead of absolute?

Here is a video showing the covariance shrinking and growing. In this video the true pose of the robot is in green with an imaginary depth sensor shown as a green cone. There are no landmarks, so no correction step. The gray is the estimated pose plus covariance ellipse at 95% confidence interval.

UPDATE: I've attached a graph that illustrates this issue better. Two graphs are shown below. The graph in red is running the EKF prediction on noise free input and plotting the area of the ellipsoid of the covariance. The area (uncertainty) monotonically increases as expected. I repeat the same thing but at t=10 I inverted the velocity, resulting in the blue graph. There is an oscillation in the area for some reason yet to be determined. 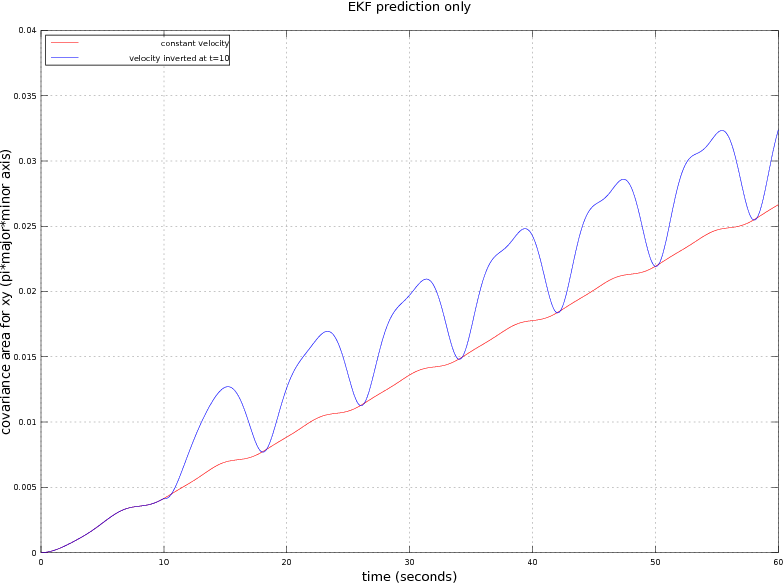 The Octave script I wrote can be found here http://pastebin.com/rQyczVbm

Browse other questions tagged localization ekf or ask your own question.