What would be the best way to handle food grains?

I'm trying to handle food grains like rice, wheat in an automated way (to cook simple dishes). For this I have to transfer grain from a larger container to a weighing scale. I know I can use solenoid valves for liquids but all solid handling valves seem to be too big (gate valves etc) and for larger applications. Is there any better way to do this ? 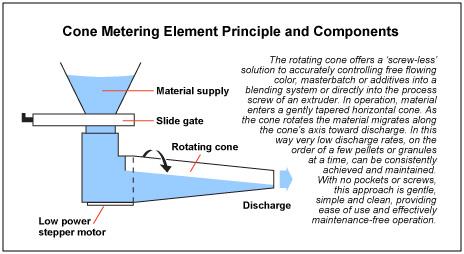 In the diagram, the axis of the cone is horizontal. The “natural angle of repose” referred to in the text is material-dependent and rotation-speed dependent. Up to some point, faster rotation delivers material faster. Some cone systems periodically reverse the direction of rotation. If the axis is horizontal, some given amount of material remains in the cone when it stops rotating, which might or might not matter in your process.

For other ideas, also see the Mixers page in the University of Michigan “Encyclopedia of Chemical Engineering Equipment”, and see the “Funnel Flow” section near the middle of the Hoppers page. As seen in the video there, the fairly coarse mixture in the hopper stops running a couple of times, until the mechanism is shaken back and forth.

There are all sorts of mechanisms for handling dry goods. If you want to do it on a small scale, look to industrial devices for inspiration, but consumer and retail devices for quick solutions. For example, there are quite a few cereal dispensers on on the market like this Zevro cereal dispenser:

Industrial systems often use augers to measure and move dry materials. I don't see why you couldn't build a small scale delivery device using a cheap auger bit rotating inside a pipe sized to fit the bit: 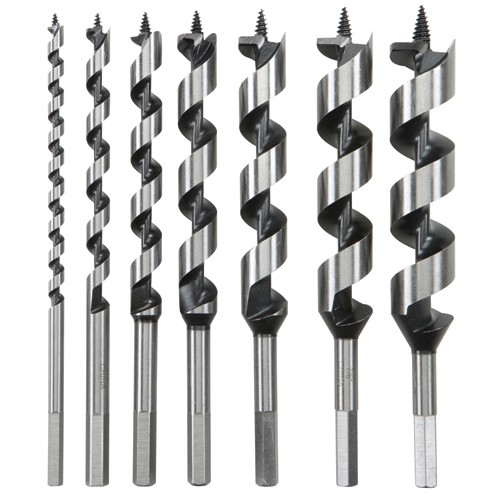 Dry goods are often measured by weight, so you might want to think about ways to weigh grains and similar materials. There are lots of cheap digital scales with a range of about 0-5kg and accurate down to a few grams. You could try to integrate one of those into your project directly, or cannibalize it for its load sensor, or even build your own load sensor. It'd be easy to put a small hopper on a scale to measure the material, use a simple gate to start and stop the flow of material into the hopper, and a solenoid to dump the hopper into a chute that delivers it for preparation.

Mechanism could be similar to bubble-gum machine. Container fills up the cup (for which you know the mass of grains). With motor you need to rotate shaft with few cups from filling to spilling :) This would give you the resolution of mass that fills the cup. From there you can transfer that grains with conveyor to wherever you need.

Not the answer you're looking for? Browse other questions tagged automatic or ask your own question.

0
Which kind of valve is used for dispensing food grains?
1
Find the right actuator to control the flow of flour
4
How to measure and dispense a finite amount of powder or liquid
1
Dispensing precise quantities of liquid and powder

1
What Does the Sensitivity Function Mean?