How to consider gravity in the design of a compensator?

I have to solve an exercise for the Digital Control System course (using MATLAB software) which stands: 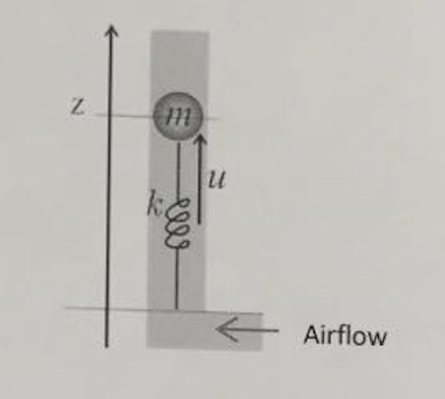 "A ball is suspended inside a vertical tube by airflow 'u' and connected via a spring of stiffness K to the bottom of the tube. The ball is subjected to gravity and a viscous friction with coefficient 'B'. The force 'F' exerted on the ball by the airflow is proportional to the airflow 'u' via the constant G; airflow can only be positive (entering the tube)."

I have also all the data needed to solve the problem numerically, but this is not important for the question. What I need to do is: "Write the system equations in state space form with airflow as input and the ball vertical position 'z' as output.Then, select a sampling time and design a digital control system that regulates the ball position by acting on the airflow to the following specifications:

After this, we have to compute the transfer function of the plant and put it in unitary feedback with the compensator.

I tried to design the compensator (a simple PID) without considering the gravity and by adding it later in the Simulink model used to test the system (after designing the compensator we have to build a Simulink model in which the discrete time compensator is tested with the transfer function of the continuous time system) but of course the system output is no more able to meet the requirements. For the gravity transfer function I considered to have the mass as input and the position as output

Am I wrong in not considering the gravity when designing the compensator? Or perhaps, if correctly implemented the gravity should not affect the system output?

Why don't you use pole placement method to meet your control objective. Since you already have a state space model it is much easier. You have to just check the controllability of your system and then based on control requirement decide on the poles. You can use cmu's Controll tutorial. http://ctms.engin.umich.edu/CTMS/index.php?example=Introduction&section=ControlStateSpace

At the same time it doesn't not make sense to me to model the whole system just to make a PID controller. With a good enough system model you can make better controllers such lqr etc.

However if you are hell bent on using a PID controller, you can still improve your PID controllers performance by making use of anti-windup and thereby making integral term much more aggressive which will increasing the response time. PID controllers don't require gravity compensators (PD controller does), but you can assist it by providing feed forward and you can always tune it to meet your requirement. At the same time you can use bode plot to check whether it is theoretically possible to attain such a bandwidth of the system without making it unstable.

The presence of gravity does impact on how fast you can achieve steady-state with zero error, because the integral part of your PID compensator needs to charge in order to counteract the term $mg$. As a result, you won't meet the requirement on the settling time, with the same setting of the gains.

It's still possible to follow your design steps if you consider adding eventually a feed-forward term $u_{ff}=mg/G$ to sum up at the output of your PID.

Not the answer you're looking for? Browse other questions tagged control pid matlab or ask your own question.

0
Help to dimension the right controller for the following Tranfer Function
1
Matlab Control Toolbox root locus
2
Transfer function of a quadrotor position controller
1
Sampling time selection
0
Understanding across gravity compensation, demonstration (Kinesthetic Teaching vs. Teleoperation) and inverse dynamics
1
How to consider gravity for the state space modeling
2
Control signal of an LQR Controller
0
How to find the nonlinear equations of motion of a seesaw-cart electromechanical system?