With a group of students we are building an exoskeleton for paraplegics. I am part of the Software & Control department and we are designing the motor controller configuration. We have several requirements:

We came op with a solution, so that we are able to connect multiple encoders. In our exoskeleton we are going to use an EtherCAT Master-Slave configuration. The High-Level control (e.g. state-machine) is on the EtherCAT Master and sends joint angle setpoints. Our idea is to use a EtherCAT Slave as a sort of second controller, which gets the joint setpoint and the joint encoder values, calculates the motor setpoint and sends this out to a certain off-the-shelf controller like the Elmo Gold Twitter or the IOMI Pro. 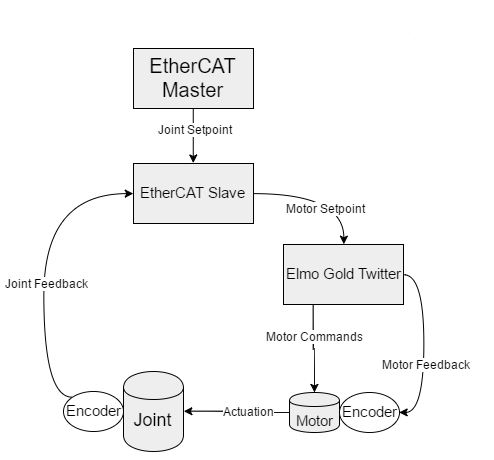 My question is the following: Is this even a good solution? And what are other solution to this problem? Are there even better alternatives for a motor controller? Might it be a better idea to build and program your own motor controller? (please bare in mind that we have limited experience in that area)

I thank you all in advance for your reply!

"My question is the following"

Is this even a good solution?

What are other solutions to this problem?

Open-ended design problems are off-topic (you could join us in Robotics Chat and ask there if you like). That said, you haven't mentioned how you are converting from a brushless DC motor to the joint, but I'm going to guess you've got some kind of fixed gearing between the motor and the joint.

Something to think about, but I'm not going to speculate on your options here beyond pointing that out. You can leverage the knowledge of the fixed gearing between motor and joint to quickly scale desired joint angles to desired motor units and vice-versa, depending on where you want to put the encoder. I believe most BLDC motors come with encoders already, though generally not absolute encoders, which you would need.

Are there even better alternatives for a motor controller?

I'll add here that I think a lot of people put cost as a specification, which is generally advisable, but they put too much emphasis on it. What matters more to you, cost or quality documentation? Cost or that the motor utilizes industry standards (NEMA bolt patterns, standard shaft sizing, reasonable power interface)? Cost or supplier's return policy? Cost or availability?

I ask because these are all (absolutely colossal) problems I've actually faced on academic design projects. Some of these oversights nearly killed a couple (graded) projects I worked on.

Might it be a better idea to build and program your own motor controller?

Generally speaking, yeah, I think that's a great project. Unfortunately for you, that's not the project you're supposed to be working on. You stated that you're part of the software and control department. The other people on this project are counting on you to get a motor controller done and programmed so the other teams can get their portion of the project completed.

A frame that can't be actuated doesn't help anyone and looks bad on everyone.

If this was your own pet project, then I'd say go for it, but because you're working in a team environment, where there are other people depending on you to complete your work in a timely manner, I'd say save that project for when you have time and try to find an off-the-shelf product that meets your needs for now.

If your teams are big enough you might be able to split this project off for yourself, after you help acquire at least passable motor controllers. The problem with designing your own is that you need to:

If you blow a board because you didn't place or solder or program something correctly, then you're out the turnaround time on the replacement parts.

If you blow a board because you didn't get the schematic right, then you're out the turnaround time on replacement boards, which again is probably a couple weeks.

How do you know the difference between blown by bad schematic and blown by bad construction? Good question. That'll probably take at least a week or two.

And the whole time, the rest of the project is stalled while everyone else on the team waits for the motor controllers.

You stated you or your team ("we") don't have much experience in that area. I don't know how you were thinking you might build and test your own motor controller circuit, but a breadboard is absolutely out of the question. Breadboards can only handle 0.5 to 1 Amp max, so whatever circuit you're testing with one is certainly not a 1.2kW motor controller, or even a 700W motor controller.

That depends on what you call good. I would certainly make sure that you can justify the role of each component in the system. Why do you need some many encoders if current exoskeletons do just fine with less? In order to decide if your solution is good or not, you should have clear list of requirements (e.g. required torques, velocities, resolution, price, etc.) including also functional requirements (elasticity of joints, etc.) If all requirments are satisfied, your solution is good.

For possible improvements, I would advise you to define each control loop you plan to have and make sure that you have the required amount of sensors and controllers to implement it. By required amount I mean no less then necesary but also no more then necesary. Each sensor you use should participate in (at lease one) a control loop and you have to be sure that the sensor is not measureing a parameter which can be easily calculated from a different sensor with the required precision. Also consider the latencys on the bus system you plan to imlement in your control loops and decide if they are acceptanble. The main idea would be to use as few components as possible, so you should be able to answer the question "Why can't the task of this component be done by an already existing one?" for each component in you schematic.

When you combine mechanics, electronics and software, there are probably an infinity of possible solutions to a problem. You can consider diffferent actuation types, differetn motor types, differen communication systems, etc.

Not the answer you're looking for? Browse other questions tagged motor microcontroller or ask your own question.

0
Encoder based speed control for Rover 5
1
control circuit of a humanoid robot (something like iCub or Asimo)
10
Control both Velocity and Position (Linear actuator)
0
Motor Controller Power Supply
1
Robotic Arm Senior Capstone. Electronics/Controls/Sensors Questions
1
Using Integral gain for motor positioning
2
Can I measure torque from this motor by only measuring the current?
0
Connect LiPo battery to Arduino Motor Driver Shield for RC Boat