How to create Matlab Simulation for Kinematics of Differential Drive

I studied the forward and inverse Kinematics of the robot and got a clear understanding. I am in the progress of developing my matlab simulation for a two wheeled differential drive robot. The robot moves in a straight line and has been integrated with PID. I want to show by the animation the movement of the robot.

I want to run an algorithm in such a way, Mat lab runs the equation and calculate the values of Total translational Speed and Total angular speed in the world frame and plot the graph. I also want to make an animation in such a way a box moves according to this equation. How can I do that? I can run it for one time if I input one value for w1 and w2, But not continuously. Help. Thanks Much. 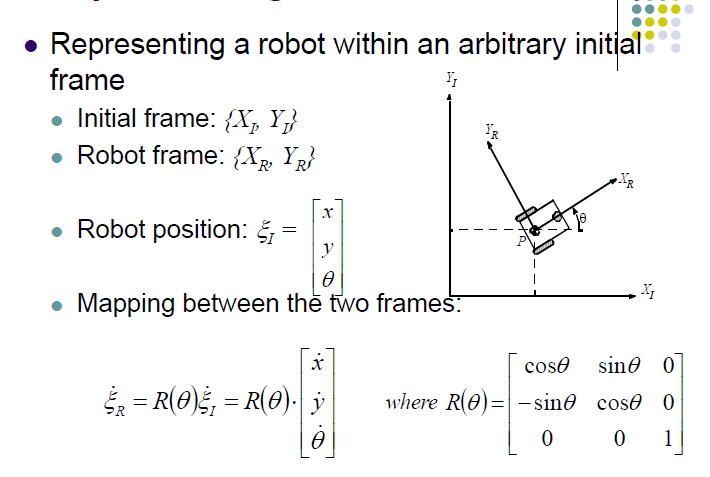 Making a plot in Matlab can be done using the plot(data) command where data is a vector containing the series of points to plot. Further refinements to the plot can include the correct timeseries for example plot(data, time) where time is a vector with the same length as data as contains the timestesp at which data has been sampled.

In each loop cycle you have to know what the simulation time of your algorithm is. E.g. you can choose to increment the time variable with 0.1 seconds in each cycle. this will be one timestep. You have to store the value of the positions of the robot (e.g. in a vector) in each timestep (please note that you only posted the velocity calculations, which for the constant input of w1 and w2 will be always constant, so expect a straight line as a velocity plot).

A simple example would be:

Please note that this is a simple example to show how to generate a position plot and requires a number of improvements for making generally applicable.

For the animation, at each timestep the a figure should be updated with the current position values of the robot. A tutorial on making animations in Matlab can be found here.

Not the answer you're looking for? Browse other questions tagged kinematics inverse-kinematics matlab simulation forward-kinematics or ask your own question.