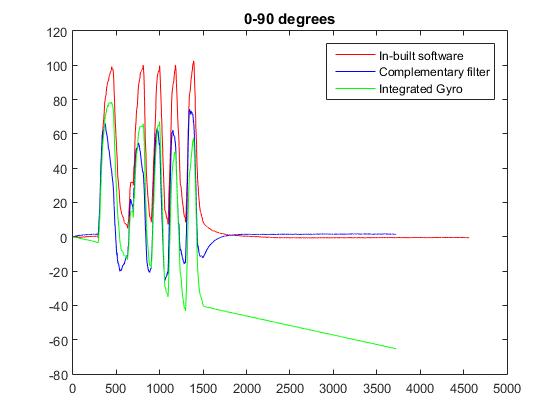 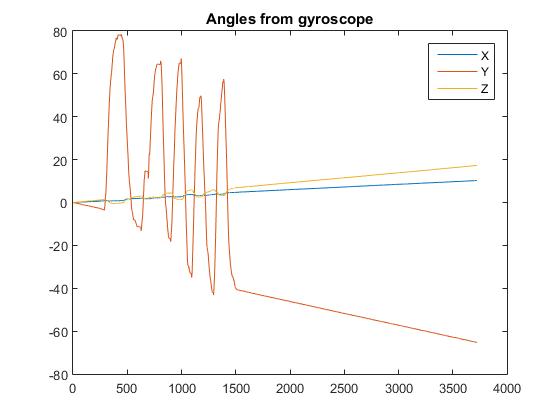 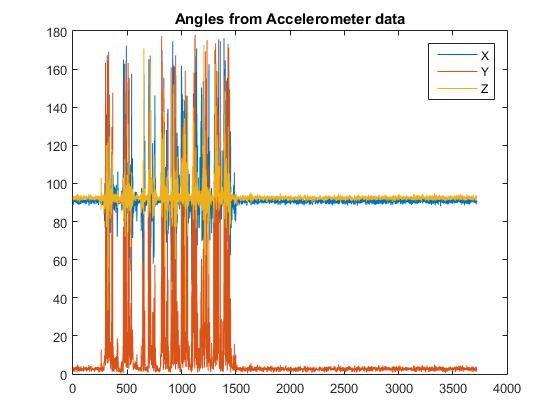 I'm trying to implement the complimentary filter to get Euler angles using accelerometer and gyroscope data. Attached is the MATLAB code that I have along with a data set.

The data corresponds to moving the sensor from 0-90 degrees while attached to a goniometer. The sensor has an inbuilt algorithm that outputs Euler angles too and I'm trying to test the accuracy of this algorithm as it tends to overshoot the angle estimates.

Can anyone please point out what is wrong and why the complimentary filter isn't working well.

There are quite a few things wrong here. I'll split them into two sections: technical errors, and coding warnings.

Here you can see that, if the accelerometer is reading 0 on the x/y axes and +/-1 on the z-axis, that there is no rotation about the x or y axes. This makes sense.

Splitting this up a little, you could rephrase it by pulling the angle term out of its own definition and calling a different variable - prevAngle. Factor the 0.99 that it's multiplied by as well and you get:

So here it's like you've got a complimentary filter in the form of:

but, your lag filter is broken, because after that line you have:

which is the same another way of saying what you have, which is:

Hopefully here you can see that, while your complimentary filter is setup okay and you retain 100% signal strength, your lag filter is broken and each sample increases in magnitude by 1.99. You should be doing k2*prevAngle + (1-k2)*angle, but instead of adding (1-k2)*angle, where (1-k2) is 0.01, you're instead adding 1*angle.

So, in summary, you are getting gibberish from the accelerometers, and combining that with gyroscope velocities with a broken filter.

I'm really not trying to poke you in the eye/salt in the wound at this point, I'm just pointing out some flaws and hopefully giving some guidance that should speed up the work I'd imagine you'll be doing in the future. (Combination of IMU filtering and Matlab all sounds like a senior/grad project).

Not only is it faster, but it's also easier to look at. Consider the following, from your code:

and compare that with the vectorized form:

A couple of things were used there - the colon operator to select 'all' rows (Acc = M.data(:,6:8)), the use of the element-wise operator, which is just a period before the regular operators (.^ .* ./), the use of repmat to get R_norm to be the same size as Acc. repmat is easy to use - the data set you want to copy, how many copies you want in the row dimension, and how many copies you want in the column dimension. Lastly, there's the cumulative sum cumsum to compound sequential sums.

So, in closing, this is probably way more than you were looking for, but former grad student to (probably) grad student, these are tips and tricks I learned along the way with Matlab.

Practice vectorizing code in everything you do. When you're working on small stuff it's easy to see if you've done something wrong. By the time you get to big projects, thinking in vectorized form will be second nature. If you wait for the big project to start trying to vectorize, you're in for a world of pain and sorrow trying to learn on-the-fly or (worse) trying to refactor a project.

tl;dr - Come for the technical review, stay for the nifty tips!

Not the answer you're looking for? Browse other questions tagged accelerometer gyroscope matlab filter or ask your own question.

0
How to filter vibration programatically?
2
How do I get MPU 6050 gyroscope data using “MPU6050_6Axis_MotionApps20.h” library
3
Gyroscope - How can I remove low frequency component with a high pass filter only?
4
How to interpret and use values of an accelerometer
0
Problem with angle calculation
4
Coordinate transform of accelerometer on rigid body
9
Accelerometers in a self-balancing robot, can't we do better?
4
Yaw drift when implementing AHRS filter fusion