In rotation matrix, Why do we rotate the first and third rotation in the opposite direction of the 2nd rotation, this is confusing. Image is attached with this. 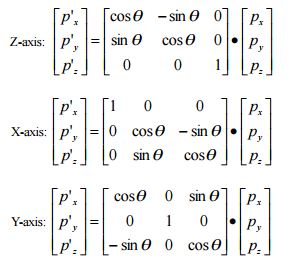 In this image we can note that for x and Z rotation non zero elements are same. But for Y rotation sign of sin(theta) changed.

I think that the main issue is that you're trying to read your rotation matrices from left to right. The sign changes seem random, but actually cycle in an ordinary way. Below follows a more elaborate explanation with some more background information.

Let's start with the question:

A) Why do minuses appear at all?

B) Why do minuses appear where they appear?

(This matrix is 2D but the same applies to 3D)

A more intuitive explanation is that all three axes of the Cartesian coordinate system are defined to be orthogonal to each other, i.e. at 90 degrees. If mapping a horizontal coordinate component from Y to X requires a rotation of 90 degrees, it follows that mapping from X to Y (i.e. the cross-diagonal element on the rotation matrix) requires a rotation of -90 degrees. The difference between the two is 180 degrees, i.e. a change of sign.

So, minus has to appear somewhere, but why are they appearing as they do? For instance, in a 2D X-Y coordinate system where X is pointing right and Y is pointing up, we could define rotation $\theta$ to be counter-clockwise (cc), or clockwise (c) leading to either of the following two rotation matrices respectively:

As you may already know, we have (nearly) globally accepted to use the former. It is just a convention, defining axes to point to the right and up and the rotation to be counter-clockwise.

Now, let's move to 3D. We cannot simply speak of clockwise and counter-clockwise and right and up anymore, because we are not forced to observe the image from a specific direction. To fix this minor issue, we rewrite our conventions such that they are also applicable in 3D:

1) We use right-handed Cartesian coordinated systems: 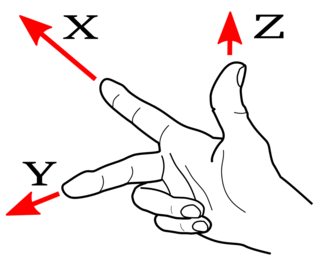 2) We use right-handed rotations:

We can do the same for the Y-Z coordinate system (Z pointing up, Y pointing right), along X. Now X will be pointing towards you. Again, we use $R_{cc}$.

Next, we have the Z-X coordinate system (X pointing up, Z pointing right), along Y. We find exactly the same, i.e. Y pointing towards you. However, Z-X does not appear as obvious in the rotation matrix, because our (flat) matrix has finite width and height rather than being circular.

If you read your rotation matrix from left to right, what appears is the X-Z coordinate system instead of the Z-X coordinate system, also along Y, but now we see that Y is pointing away from you now. This changes the direction of rotation. Hence, you see $R_c$ appearing instead of $R_{cc}$. 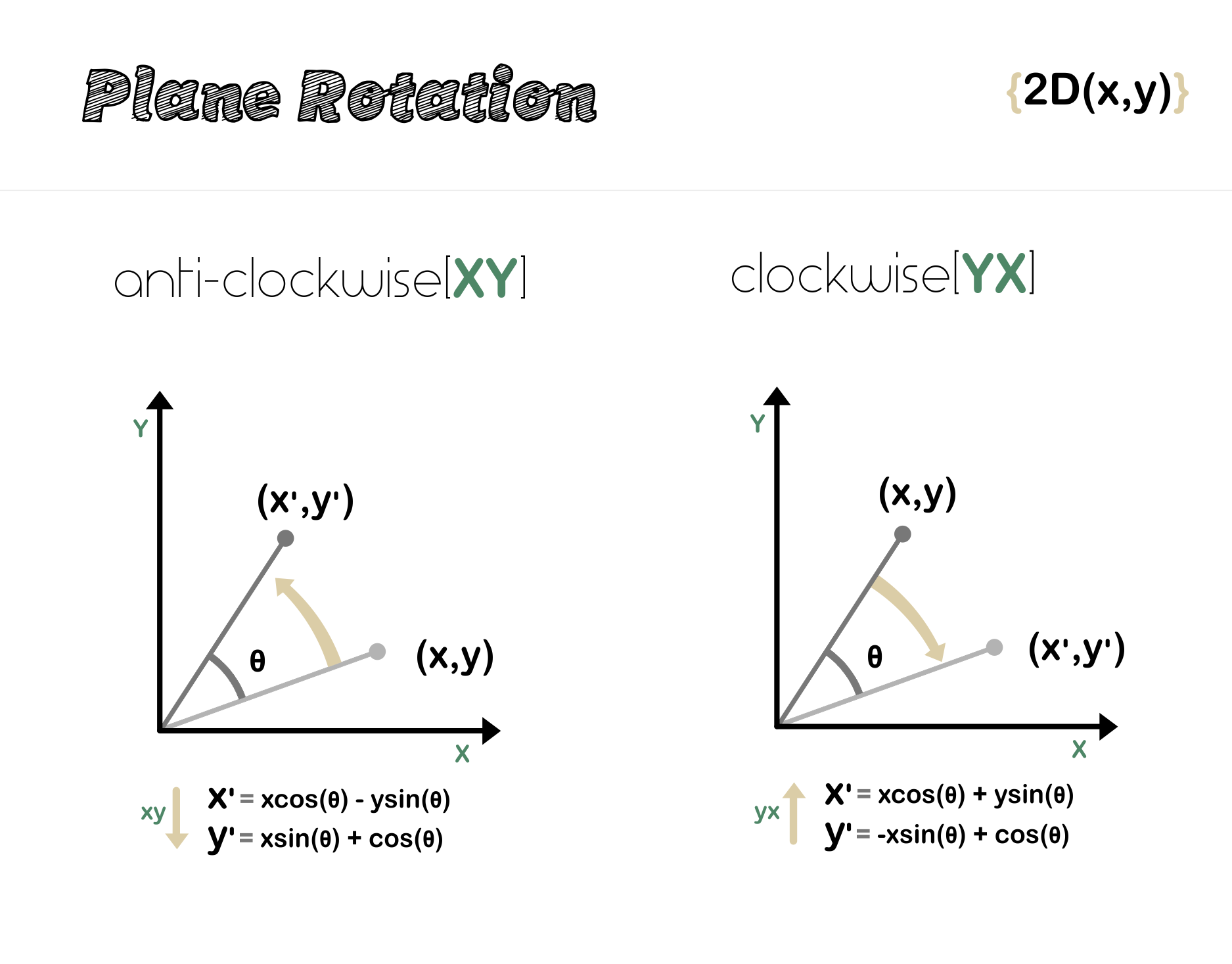 The real dig to the sign convention is direction and the way humans like to perceive things orderly or at least using a reference. clockwise and anti-clockwise directions only exist with 2D planes but the inherent nature of man's stubbornness would lead him to create the right-thumb-rule to support the notion of a 3D or 4D clock existing in the nearest future. other than that there is really nothing to it and I'd argue you can decide either of your sins(no pun intended) gets a minus or not(values along the diagonals are always preserved hence cos for any rotation matrix is always positive) because in higher dimensions there is no up or down, left or right except if assigned(with a bias) which is usually because humans are scared they must always be able to represent rotations in this form e.g. rotating a point from left to right or from bottom to top( where $z$ -> top, $x$ -> bottom(left), $y$ -> bottom(right) ) 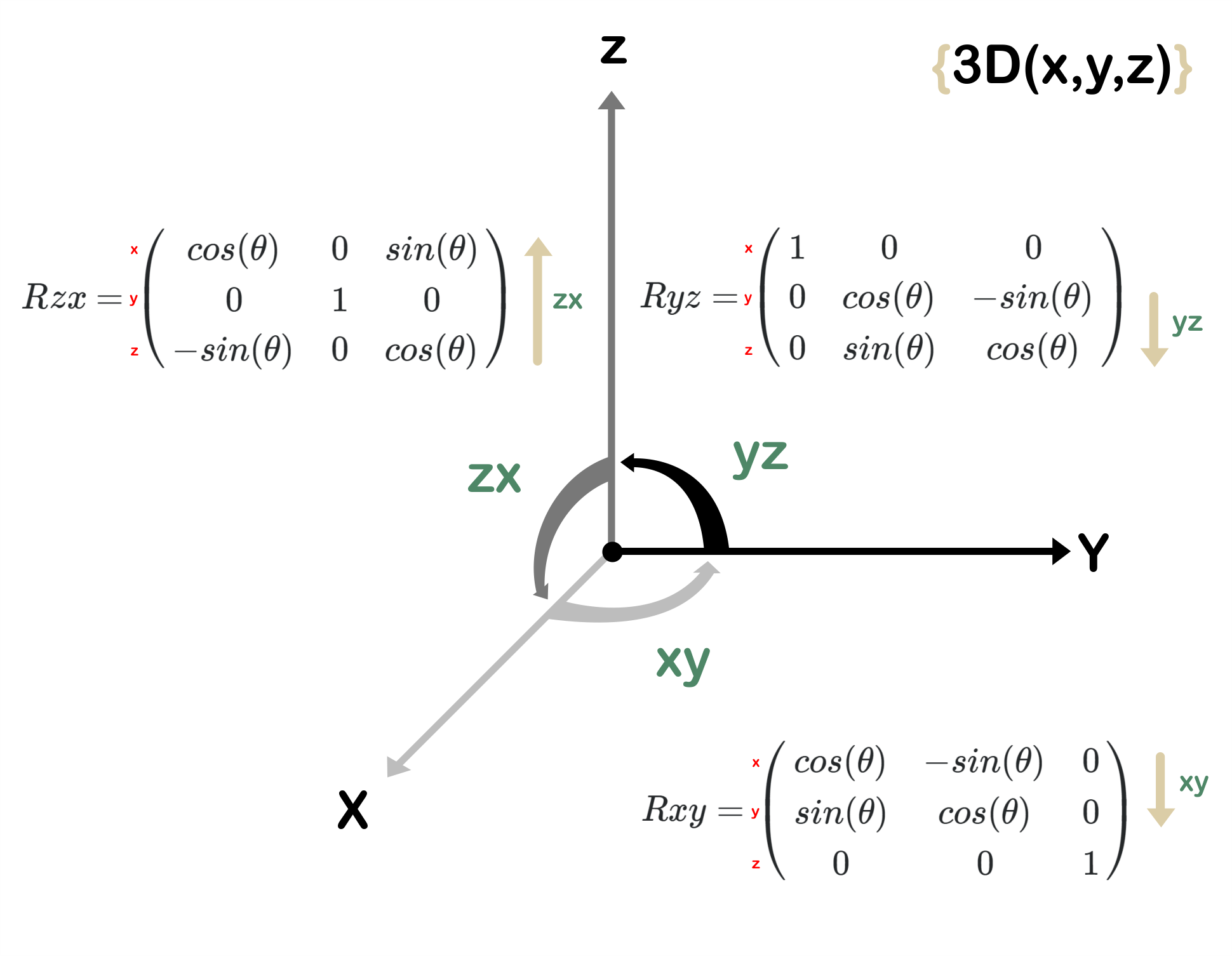 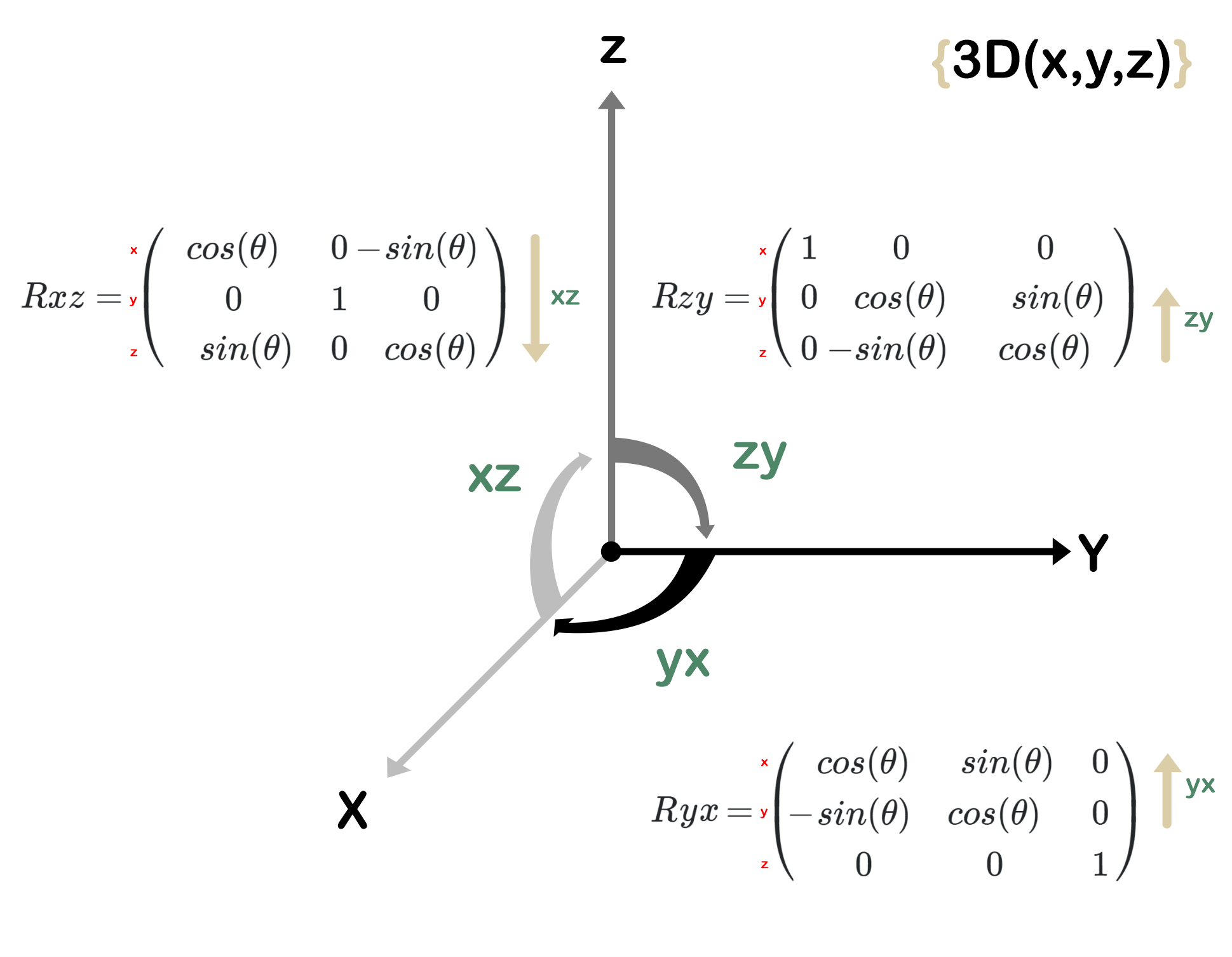 From the diagrams above 2D-perspective anti-clockwise ($XY,YZ,ZX$) and clockwise($YX,XZ,ZY$) rotations can be seen thus you can be sure that for your rotation matrix needs Rxy = -Ryx, Ryz = -Rzy and Rxz = -Rzx i.e.

which implies they are opposite in direction and as per your taste you can as well decide you want your set of transformations to be e.g. $XY, YZ, XZ$(Rxy,Ryz,Rxz) instead of the matrices you provided earlier which corresponds to $XY,YZ,ZX$(Rxy,Ryz,Rzx) or by going even further to break all the rules you may decide $YX,ZY,ZX$(Ryx,Rzy,Rzx) is the most suitable for your maximum satisfaction

N.B When it's said that a 3D object is rotated via the z axis this means its plane of rotation was $XY$. I gave a better explanation here

The convention of these rotation matrices follow the same positive direction of rotation as the cross product in a right handed coordinate system.

Not the answer you're looking for? Browse other questions tagged inverse-kinematics rotation or ask your own question.

4
How to invert D-H parameters
2
Most accurate rotation representation for small angles
3
Why Euler Angle is set to be in ZYZ order?
0
What is my last rotation matrix for the last three angles when i have found the first three when doing inverse kinematics to a 6dof robot?
1
Conveyor Belt Calibration for a Robot - Rotation Matrix
1
Multiple Rotations via Matrix Multiplication
0
Multiplication of rotation matrix help
2
Confusion about Gimbal lock