My goal is to control drone by Raspberry PI. The Raspberry PI uses camera and OpenCV, sends control commands to AVR microcontroller which will generate the PWM control signal. Meaning that it will simulate pilot with transmitter-receiver setup.

In other words (to make it more clear). Raspberry tells the Atmega8 that the drone needs to go more forward. Atmega8 generates custom PWM signals on 8 pins. Those signals are sent directly to CC3D pins responsible for roll, pitch etc. Atmega8 replaces controller receiver in this setup. It generates signal not based on user input but on what Raspberry tells it.

In order to do that I need the parameters (period, voltage etc.) of the PWM signal that CC3D accepts to properly simulate it. I have found this topic:

He has the same problem as I do and he found the solution. Unfortunately I can't send pm and I can't comment because I'm new to the site... so basically there is no way for me to contact him.

So any help would be appreciated.

Ok I actually was able to make it work.

First of all in the beginning of the testing I used my own program which generated PWM signals. I wanted to make them 50Hz with 1.5ms of duty cycle being neutral position (of stick of the controller for example), 2ms max and 1ms min. Unfortunately when I connected my microcontroller to the CC3D I wasn't able to get through calibration of the controller reliably.

So you could understand everything: I wrote a program in Python which reads keyboard buttons presses and sends data packet to microcontroller. By default the data sent from computer to AVR micro controller connected to CC3D looks as follows:

When I press one of the keys defined in Python program it would send:

The micrcontroller breaks down this message and uses the numerical values between letters to modify the PWM duty cycle.

I tested it again and again and sometimes I could get through calibration in LibrePilot (program to configure CC3D) but after the program showed really crazy behaviour of the sticks and buttons on the controller.

THE SOLUTION: Actually the solution is simple. Just use servo library for Arduino (I'm using Atmega8 with external 16Mhz and Arduino bootloader). It generates almost perfect 50Hz (my program couldn't generate as good of a custom PWM). With signal like that LibrePilot calibrates properly. Also worth pointing out is that you don't have to have those values of 1.5ms, 1ms, and 2ms set on the microcontroller. If the values are reasonable the LibrePilot's calibration process will be able to use the duty cycle you signal generates and bind it to max, min, neutral.

Below you can see how my hardware looks like. I hope I described everything clearly. 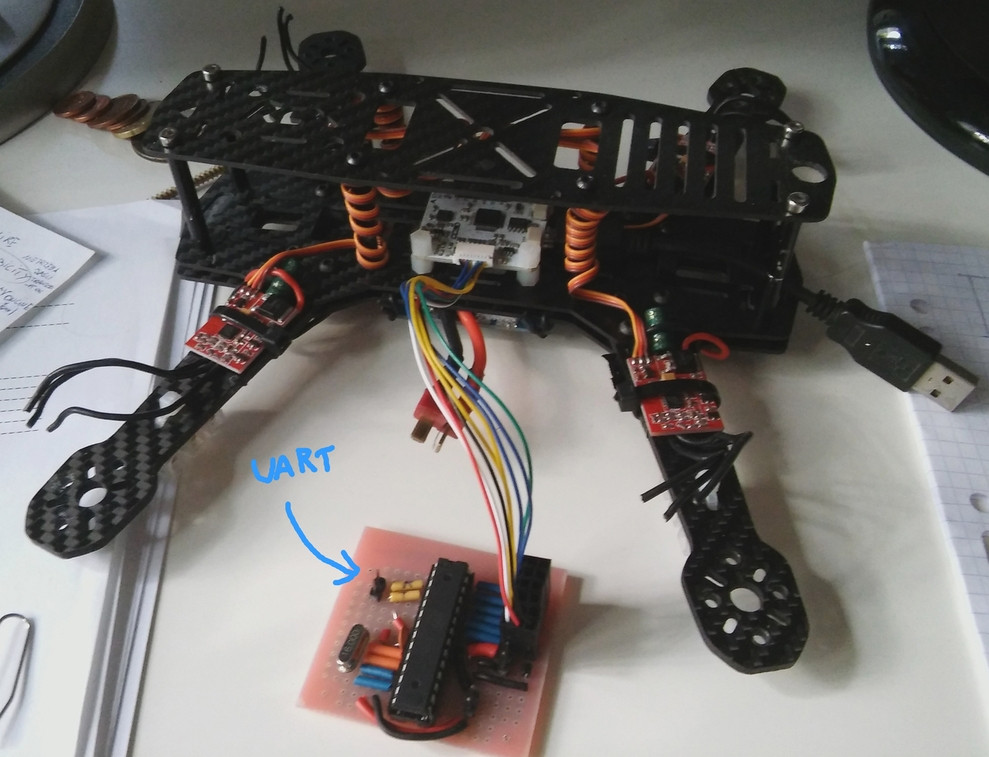 Not the answer you're looking for? Browse other questions tagged quadcopter arduino raspberry-pi uav avr or ask your own question.

2
How to connect an infrared remote control to PC or Arduino or Raspberry Pi?
3
Android phone + ADK + Arducopter APM 2.5 for autonomous quadcopter
6
CC3D - Replacing RC emitter with an RPi
4
How can i connect two adafruit 16-channel 12-bit PWM/Servo Driver I2C interface (pac9685) to Raspberry or Arduino
2
BBC Micro bit PWM link to CC3D quad controller
0
Build a drone with a raspberry pi 2 as receiver for the CC3D-LibrePilot
0
How can i convert Torque input into PWM signal?
1
What is the noise in this PWM signal?