I'm using a basic trig/echo Ultrasonic Sensor with an Arduino Uno. I get accurate readings until I cover the sensor at which point I receive very large numbers. Why is this?

I changed the amounts from inches to milimeters to get a more precise reading. I held the sensor ~100mm from a granite counter-top and quickly lowered it until the tabletop covered the front of the sensor.

You said it yourself: you're using an echo-based ultrasonic sensor.

Imagine this: you are a sensor looking at a piece of fiber optic cable. From far enough away, you see the cable as an object. You can determine how far away it is because you are looking at it.

The cable gets closer and you continue looking at the object until, at some point, it becomes coupled to you and you now begin to look through the cable.

I would imagine the same thing is happening with your hand. In time of flight sensors there's usually some "turn on" time that delays turning on the receiver to prevent the transmitter from directly driving the receiver. This turn on time corresponds with some minimum distance, inside which an object cannot be detected.

So, your hand gets closer, and the sensor sees your hand as an object. At some point you pass the minimum threshold, and the sensor no longer detects the reflection at the air/skin interface. It still listens for an echo, though, but now all the remaining sound energy is inside you.

You are now akin to a (crappy) fiber optic cable - the sound is free to bounce around inside you, reflecting off of whatever doesn't have the same acoustic impedance as your skin. Every time it hits an interface (skin/muscle, muscle/bone, etc.), some energy is absorbed and some is reflected. This is exactly how a medical ultrasound works.

At some point the sound waves scatter back to the point where they entered, and pass back through your skin and that's when the echo is recorded. The scattered path length is the distance you are seeing.

I would bet the value would change based on what part of your arm you use (not that I would recommend doing it).

You should consider building a measurement model for your sensor--this will enable you to use your measurements in an effective probabilistic manner. The problem is that beam sensors are noisy, ultrasonic sensors especially so; furthermore, this sensor noise is not typically uniformly distributed.

Sebastian Thrun covers this topic quite well in Chapter 6 of Probabilistic Robotics, in fact, he considers an ultrasonic sensor explicitly. Thrun suggests that the probability distribution of measurements is combination of four different distributions characterized by beam sensor response. 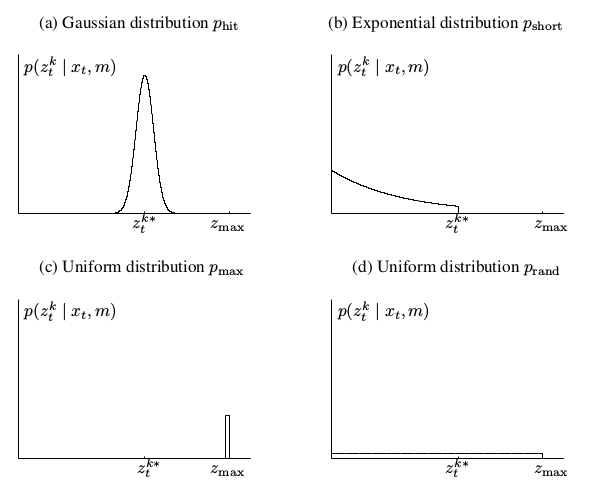 There are two takeaway points:

Not the answer you're looking for? Browse other questions tagged arduino ultrasonic-sensors or ask your own question.