In how many ways can a six propellers drone fly or rotate?

I thought it were twelve ways:

But according to Vijay Kumar Dean of Penn Engineering , it seems that I was wrong...

Then I read this article about modeling and robust trajectory tracking control for a novel Six-Rotor Unmanned Aerial Vehicle and this one about navigation and autonomous control of a Hexacopter in indoor environments but was never able to find such an information.

I then guessed that 3 of the rotors could go one direction and three others into another which would add 6 other ways for rotating and therefore 6 others for simply flying but that is only a guess. 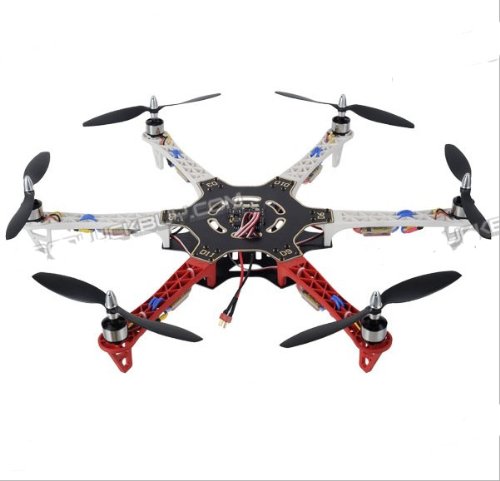 In practice, every multicopter (including 6-propeller hexacopter and 4-propeller quadcopter) that I've seen so far has 4 degrees of freedom: pitch, roll, yaw, and climb.

The minimum number of rigid rotors to get 4 degrees of freedom is 4 rotors. (Single-rotor helicopters have articulated blades and swashplates, which are more complicated than rigid rotors). One big advantage of using more rotors than the theoretical minimum number is so that if/when something goes wrong that affects one of the 6 rotors, the remaining rotors can still control all 4 degrees of freedom for a controlled landing.

Such multicopters, like single-rotor helicopters, must go through a "roll -- pull collective -- unroll -- push collective" sequence to move a little bit to the right, since they cannot directly control the "forward" or "right" translation degree of freedom.

In principle a multirotor helicopter with 6 or more rigid rotors (hexacopters, octocopters, etc.), if the motors are rigidly mounted at the appropriate tilt(*), or a tandem rotor helicopter if the articulated blades are controlled appropriately, can directly control all 6 degrees of freedom.

Such a helicopter can move sideways directly by increasing sideways thrust, without tilting. For example, with a tandem rotor helicopter where the forward rotor turns clockwise as viewed from above, if the controller drives the swashplates so the front rotor tilts forwards and the back rotor tilts backwards, the helicopter as a whole will accelerate to the right without rotating.

Generally half the rotors will go clockwise and the other half go counterclockwise so the drag on the rotors do not cause a net rotation effect. To manoeuvre, the relative speeds of the rotors change.

Running the rotors faster or slower causes more or less downforce. Doing the same to all the rotors will cause the copter to climb or descend. Doing so to the rotors on one side only will tilt the copter. Once tilted, the total downforce has a sideways component so the copter will move towards the lower side. Slowing down the rotors turning one direction and speeding up those in the other direction imbalances the drag and the copter will turn.

The above scheme effects rotation about thee axes are movement along three axes. That is all the degrees of freedom any solid body can do in three dimensional space.

None of these behaviours directly depend on the number of rotors - three rotors are enough to do all of above, and you can achieve nearly as much control with only one single bladed rotor and more complicated algorithms.

A physical system only has 6 degrees of freedom - you can't have more than 6 ways to move. It doesn't matter how many propellers there are. There is forward/backward (translation) along the x/y/z axes and rolling side-to-side (rotation) about the x/y/z axes. Any off-axis motion just means that there is a combination of fundamental axial motion.

I'll add, as @DavidCarey mentions, that just because you have 6 actuators (6 propellors) doesn't mean you automatically can control all 6 degrees of freedom.

As I hint at above, you can have a non-standard 6 propeller arrangement, where 4 fans are planar pointed at +Z, then one each is pointed +x and +y. In that way you can roll, pitch, yaw, and translate along x/y/z. Then you have 6 axes of control.

But again, for a planar arrangement, a 6 rotor vehicle still only has 4 axes of control.